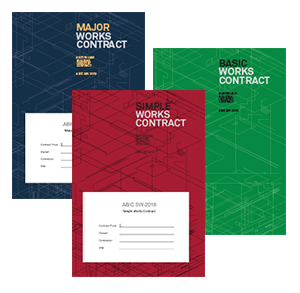 The Australian Building Industry Contracts (ABIC) are jointly published by Master Builders Australia Limited (Master Builders) and the Australian Institute of Architects (Institute). They are intended for use in building projects where an architect administers the contract. The 2018 revised editions of the ABIC Major Works (MW) and Simple Works (SW) commercial and domestic documents and template forms (previously called Contract proforma) are now available under the relevant state and territory pages. For a revised edition of the ABIC Basic Works (commercial) contract refer to ABIC Basic Works BW 2018.

Search for and buy contracts through our Online store.

Note: The new Corporations Act / insolvency laws will affect all contracts and in particular Section Q of the ABIC contracts, refer to the ABIC MW or SW User guide under the relevant state and territory pages. For an explanation of the changes refer to Termination rights and insolvency events.

ABIC contracts are designed to make contract administration clear and less prone to dispute or time-consuming negotiation. ABIC contracts bring certainty to the process, requiring timely presentation and resolution of claims. They have been extensively refined and field-tested and feature:

There are different contracts for each state and territory for various types of projects. Selecting the right building contract can be critical to the success of a project.

The contract should be selected to suit each individual project, taking account of its complexity, value and any specific project issues or requirements. A contract selected simply because the architect is familiar with its provisions or is comfortable using it, won’t overcome the inherent difficulties that can arise if the contract is inappropriate for the project.

Differences between SW and the MW contract

ABIC 2008 MW and SW versions withdrawn from sale and use

Effective September 2019: The ABIC 2008 versions of MW and SW are no longer published and have been withdrawn from sale and use. They have been replaced with the 2018 revisions of MW and SW, which were released in April 2018. The ABIC co-authors no longer give copyright permission for anyone to use the 2008 versions (and 2011 versions in Queensland) of the ABIC MW and SW contracts, subcontracts, User Guides, the associated ABIC supporting documentation, nor the related Acumen guidance (the ABIC 2008 Materials). The ABIC co-authors do not give anyone permission to use, adapt, modify, reproduce nor communicate the ABIC 2008 Materials, unless permission is given under an express licence. Any such use is a breach of copyright and at a user’s own risk. The Institute no longer provides customer support or guidance about the ABIC 2008 Materials and we encourage all users to purchase and use the 2018 contracts and related supporting documents.

Only eligible Institute members and subscribers can view the rest of this note. Please register or login to view.
Become a member Login
Tags: